The Head-Smashed-In Buffalo Jump documents and tells the
story of an ancient hunting technique used by Plains People for thousands of
years. The Plains Buffalo Runners herded the buffalo through a system of drive
lanes then caused the buffalo to stampede over a cliff. A cliff of this nature
is known as a Pis’Kun. This Buffalo Jump produced more food in a single moment
than any other form of communal hunting anywhere in the world.

Head-Smashed-In was used as a Buffalo Jump for almost 6,000
years and is one of the oldest, largest, and best preserved buffalo jumps on
the northwestern plains. This site is older than the Pyramids of Egypt and
Stonehenge.

Located in south western Alberta, Canada, HSIBJ is 90
minutes south of Calgary just west of Highway # 2. The site is open year round.
Visit our web site for current information: https://headsmashedin.ca/

The site itself is situated on the traditional domain of the
Blackfoot speaking people, otherwise known as “Siksikaitsitapiiks”

Notes from "Frequencies of the Land: an Ancestral Invitation to meet the Land where it is in space and time" 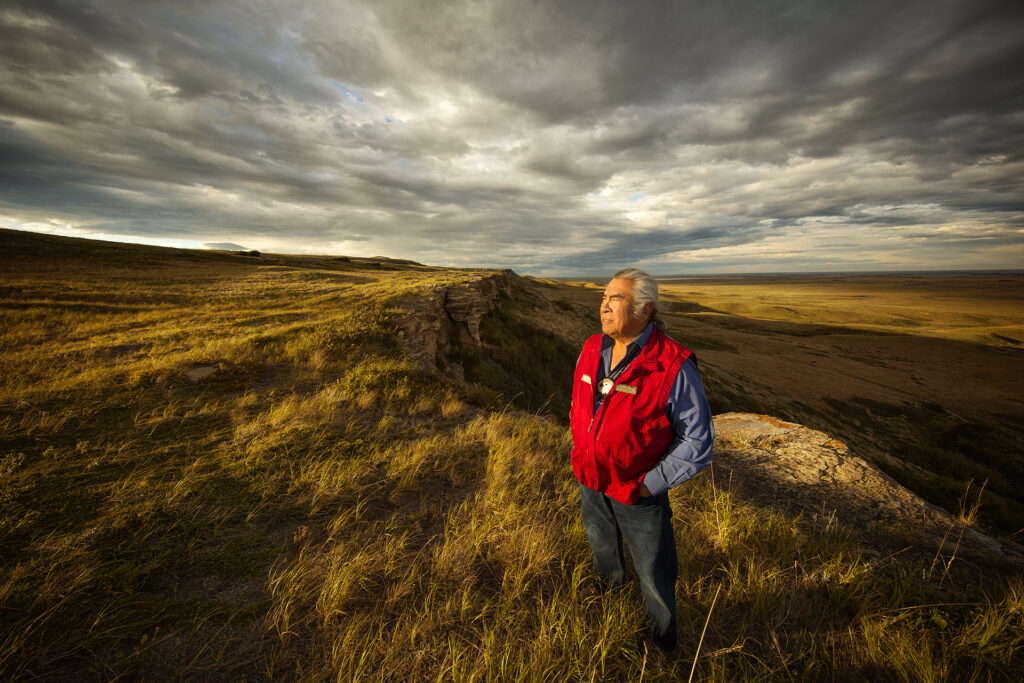 If you want to get a glimpse into the sophistication how the Niitsitapi (The Blackfoot) would operate a buffalo/bison jump hunt, the Head-Smashed In Buffalo Jump Interpretive Centre will take you on a journey into this ancient practice. Many of the stories you hear and learn about at Head-Smashed-In will give you a new appreciation of how civilized and intelligent Indigenous Peoples were, are, and always will be.

“As Blackfoot stewards of this sacred site, we are thankful for UNESCO in helping to protect this site over the years and into the future.”  – Quinton Crowshoe, Manager of Special Events and Marketing at Head-Smashed In Buffalo Jump.

Beauty and power collide at Head-Smashed In, a place that is older than the pyramids at Giza and time itself. I grew up a stones throw away from this majestic area, I invite all of you to come and experience the place I call home.

Lethbridge, Alberta
Fort Whoop-Up is a replica of an original fur trading fort built in the late 1800s.
View Place | Get Directions

Lethbridge, Alberta
The Galt Museum & Archives collects and displays the stories of human history in south…
View Place | Get Directions

Gjoa Haven, Nunavut to Crowsnest Pass, Alberta 17 places
A journey through the past to grow for the future
View VisitList

Victoria, British Columbia to Saint Lunaire-Griquet, Newfoundland and Labrador 17 places
Long ago and far away . . . yesterday and next door
View VisitList

We are now living in a world of endless information about the cosmos. New hi-res photography of the distant universe is shared with the public every year. With so much data at our disposal, we must confirm that like the universe, our perception of all things “reality,” philosophy, art and technology must be calibrated to […]