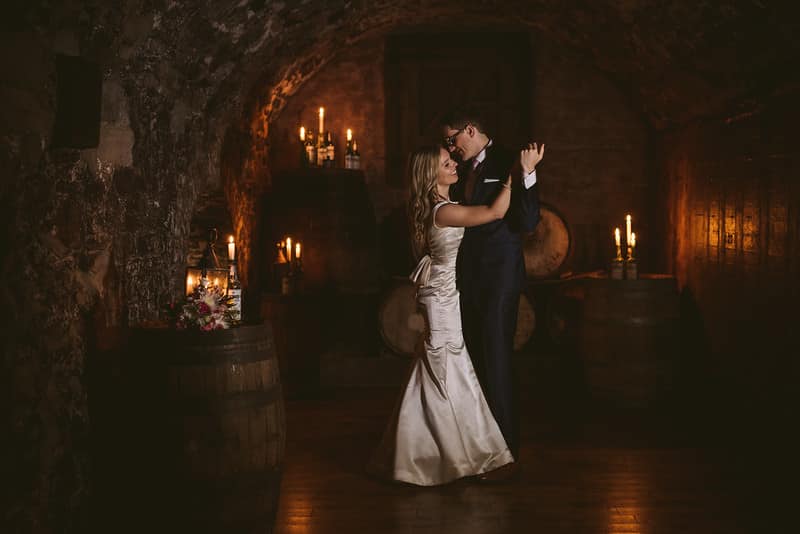 We’ve been on the hunt for sweet love stories in historic places – and these historic gems did not disappoint. We found lovers’ secrets hidden in nooks and crannies, sites for stolen kisses, and dramatic betrothals in gracious spaces.

Ever heard of a kissing spot? This is usually a spot where a couple can meet to share a kiss in secret. We were curious to know of historic places with a kissing spot on their premises. Lougheed House did not disappoint, and shared great photos of their inglenook complete with starry-eyed (thespian) lovers enacting a romantic scene.

While inglenooks were originally built to afford women a somewhat private place to remove their boots without showing their ankles, the one at the Lougheed house has morphed into a popular cozy spot for couples to sit in relative seclusion as they observe exhibit openings, parties and other public events – or maybe exchange a kiss.

Photo: Two cast members from the 2016 production of Much Ado About Nothing, produced by Edmonton’s Thou Art Here Theatre Company, in the inglenook at Lougheed House (photo by Nico Humby)

Niagara-on-the-Lake is a romantic getaway, with its carriage rides, spas and of course the iconic honeymoon destination of Niagara Falls less than a half-hour drive away. The Niagara-on-the-Lake Museum has its own share of romance and seems like a great place to make a wedding proposal.

In 2007, the staff at the Museum were thrilled to help a young man surprise his girlfriend with a romantic proposal during their stay in the historic town. The museum’s staff worked with the groom and his brother to choose a quiet part of the museum, and placed an engagement ring in an exhibit case, with red velvet ropes around, and an engraved plaque the groom had made specifically for the occasion.

“It was really great to be a part of the whole thing. The bride was quite shy and seemed stunned on the proposal day, but she said yes. They came back several months later to visit and thank us again, and they were making plans for their wedding”, shared Amy Klassen, director of finance & marketing at the museum.

Photo: The ”proposal” exhibit. (photo submitted by the Niagara-on-the-Lake Museum).

Whether it’s beautiful old structures, cultural landscape or heirloom gardens, Historic Places are without a doubt a place of choice for photographers. The Historic Stewart Farm in British Columbia is no exception. Families and couples are often meeting at the farm for photoshoots – it is also a very popular spot for engagement photos! Located by the water, with the farmhouse and seven other outbuildings, the orchard, and the flower gardens, there is definitely an abundance of beautiful landscape – creating the perfect romantic atmosphere perfect for couple to take pictures.

As well as being one of the most prolific and influential writers of his time (and, arguably, Canadian history), Stephen Leacock was very much of a “man’s man” with strong Victorian emotional sensibilities. Owing to this, and the fact that nearly no correspondence between him and his wife remains, it’s been difficult to characterize the kind of relationship he had with his wife, Beatrix. By most accounts, he was very loving and devoted right up until her death from breast cancer in 1925.

In 2000, ductwork was completed in Leacock’s bedroom in his old house in Orillia. During this work, a contractor removed a piece of trim from the wall in Leacock’s closet which revealed a hidden compartment where 30 handwritten letters had been stored.

The letters weren’t particularly riveting – general updates from Beatrix and Stephen Jr. as they made their way back from the Bahamas to the family’s home in Montréal. They were however dated from January to March 1925 and Beatrix lost her battle with breast cancer in following December. There is then a very good chance that these were among the last letters that Beatrix ever sent her husband, and that he stored them in a hidden compartment in a place very dear to him (Leacock bought the property years before buying the house in Montréal, and built the house three years after she died).

“I believe that says everything about their relationship that we should ever want to know. To my mind, this completely confirms the accounts of his devotion”, Shares Tom Rose, Collections and program supervisor at the Stephen Leacock Museum.

Photo: Beatrix in the Sunroom of the 1922 cottage in Orillia (photo courtesy of the Leacock Museum)

It is arguably the oldest building in St. John’s. According to legend, in 1679 a Newman & Company vessel loaded with port wine left Portugal for London but was driven off course and came to pass the winter in St. John’s. When the ship returned to England the following spring, her cargo was found to have improved in flavour. From then until 1996 Newman’s celebrated “Ruby Port” was aged in Newfoundland – much of it in the romantic stone vaults on Water Street.