Tashme was Canada’s largest of 10 Internment camps and 7 official self-supporting sites Japanese Canadians were forcibly relocated to during WWII.

The declaration of war on Japan on December 8th, 1941 unleashed a series of events that would forever change the lives of Japanese Canadians.  Despite reports from the Canadian Armed Forces and RCMP stating that there was no perceived security threat from the Japanese Canadian community, the Canadian government took drastic actions.  Curfews were imposed, Japanese language schools and newspapers were closed and Japanese Canadian community leaders were detained. Privately owned homes, businesses, vehicles, and fishing boats were seized.  As a national security measure, the government established a 100 mile (160 km) ‘exclusion zone’ area inland from the coast of British Columbia.   All persons of Japanese ancestry, almost all of the 23,000 Japanese Canadians living in Canada at the time, were forcibly removed from the ‘exclusion zone’ and sent to hastily constructed internment camps in the BC interior, to sugar beet farms in Alberta and Manitoba or to road camps throughout BC.

Tashme was established on a privately owned dairy farm 14 miles east of Hope, located in an isolated narrow valley and surrounded by high mountains.  347 crude shiplap tar-paper covered houses, often called “shacks”, were hastily constructed. Each house measured 16 feet x 24 feet with no running water, electricity, or insulation.  Existing barns were renovated and converted into living quarters, schools, churches, and a butcher shop.  Also constructed were a general store, bakery, post office, mess hall, RCMP detachment, fire station, power station, an administration office, and a 50 bed fully equipped hospital.  Tashme was a primitive yet thriving community with amenities of a small village and home to 2644 persons at its peak from September 1942 until it was closed and dismantled in October 1946.

In August 2016, to honour and share the story of Tashme, the Sunshine Valley Tashme Museum was established in the original Tashme butcher shop.  With 2000 square feet of exhibit area, artifacts and displays, it also showcases a historic replica “shack” which brings you back to the time of Tashme for an authentic look into daily life.

Located 19 km East of Hope, BC on the #3 Hope-Princeton Crowsnest Highway. Follow directional signage to the museum from the front entrance of Sunshine Valley.

Notes from "Uncovering Japanese-Canadian History in BC" 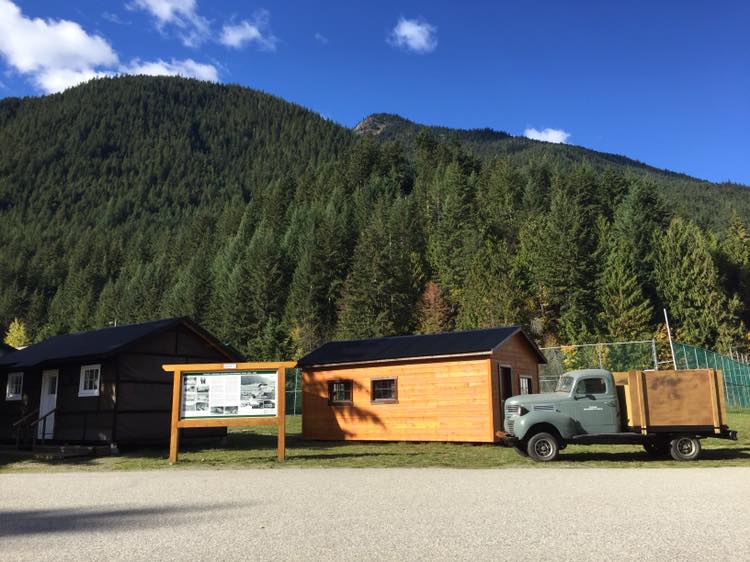 Chilliwack, British Columbia
We are committed to connecting you with Chilliwack’s History
View Place | Get Directions

Abbotsford, British Columbia
Revisit the Sumas Lake Drainage Project to learn what was gained and how much was lost
View Place | Get Directions

Japanese Canadian Historic Sites in BC: Journeys of Home

Uncovering Japanese-Canadian History in BC

Vancouver, British Columbia 3 places
What I learned as a student volunteer in the UBC Reading Week Projects.
View VisitList

What I learned as a student volunteer in the UBC Reading Week Projects.