Type
Theatre/Dance Hall
Address
1 Dawson Charlie Street, Carcross, YT, Canada
Get directions
Hours
The Caribou Hotel will re-open when it is safe to do so and Mrs. Gideon will be there to greet you!
Phone
867-393-4551

In 1898 at the start of the Klondike Gold Rush, John Barrett arrived in Bennett, B.C. He set up a tent beside the Dawson Hotel and opened a wholesale liquor outlet.

Following the gold rush the building was purchased by William “Big Bill” Anderson and moved down Lake Bennett to Carcross and re-named the Anderson Hotel.

In 1903, this hotel was sold to Dawson Charlie, one of the discoverers of Klondike gold and a member of the Carcross/Tagish First Nation. Charlie had the hotel extensively remodelled and re-named it the Caribou Hotel. Following Dawson Charlie’s death in 1908, Edwin and Bessie Gideon rented and operated the hotel from his heir, Annie (Charlie) Auston. The hotel burned to the ground on Christmas Eve, 1909, along with an adjacent store and the nearby White Pass & Yukon Route (WP&YR) railway depot. The Gideons constructed a new hotel in the same location and re-opened in 1910.

The sternwheeler, S.S. Tutshi, was constructed in 1917 to service growing tourism in the region. Over time the hotel provided accommodation and services for tourists, big game hunters, visiting dignitaries, and long term lodgings for the Royal Canadian Mounted Police, construction workers, and local residents. Johnnie Johns, a member of the Carcross/Tagish First Nation and world renowned and respected big game outfitter, had a long working relationship with the hotel. Many of his clients stayed here.

The Caribou Hotel also figured in the construction of the Alaska Highway when the United States Army and private road construction crews used the hotel for housing and a mess hall. With as many as twenty-five trains per day rolling through town, Carcross was a major operational centre for workers, equipment and materials.

The Caribou Hotel has been home to a number of famous characters including Polly the Parrot—who resided at the hotel from 1918 until his death in 1972, and was known for singing opera, drinking whiskey and cursing.  The Caribou Hotel’s “Surly Bird Saloon” is named in Polly’s honour. 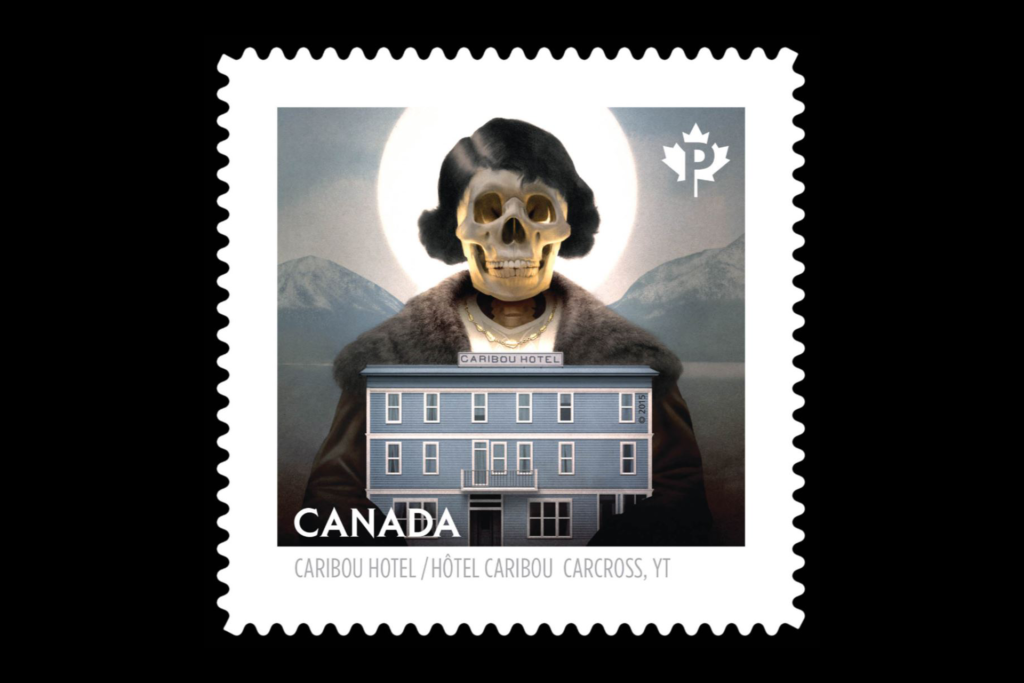 This 121-year-old hotel has hosted tourists, big game hunters, visiting dignitaries, the Royal Canadian Mounted Police, the builders of the Alaska Highway, as well as local residents. Of all the people who have walked through the doors of the hotel, there is one that has not quite left. The hotel has had a constant occupant since the early 1900’s, Bessie Gideon, part owner of the Caribou Hotel. The ghost of Mrs. Gideon is said to be very hospitable and is known to look after guests by knocking on doors and adding bubbles to baths. She has also been spotted peering out of the third-floor window with her parrot, Polly.

The Caribou Hotel is also one of Canada’s most famous haunted hotels and was featured with a Haunted Canada Postage Stamp!

Bessie Gideon died in 1933, five years to the day after her husband’s death on October 27th.

She is a hospitable spirit who refuses to leave the premises and has been known to look after her guests by knocking on doors and adding bubbles to baths.  She has been seen peering out of a third floor window with her beloved parrot, Polly.

Canada Post honoured Bessie Gideon and the Caribou Hotel with a Haunted Canada Postage Stamp in 2015.

Whitehorse, Yukon
The S.S. Klondike honors the steam-powered ships that linked Whitehorse to the world.
View Place | Get Directions

Whitehorse, Yukon
Trail that served as a trade and travel route for centuries, incl. during the Gold Rush.
View Place | Get Directions

Whitehorse, Yukon to Carcross, Yukon 8 places
Visit the places experienced by stampeders during the Klondike Gold Rush of 1898!
View VisitList