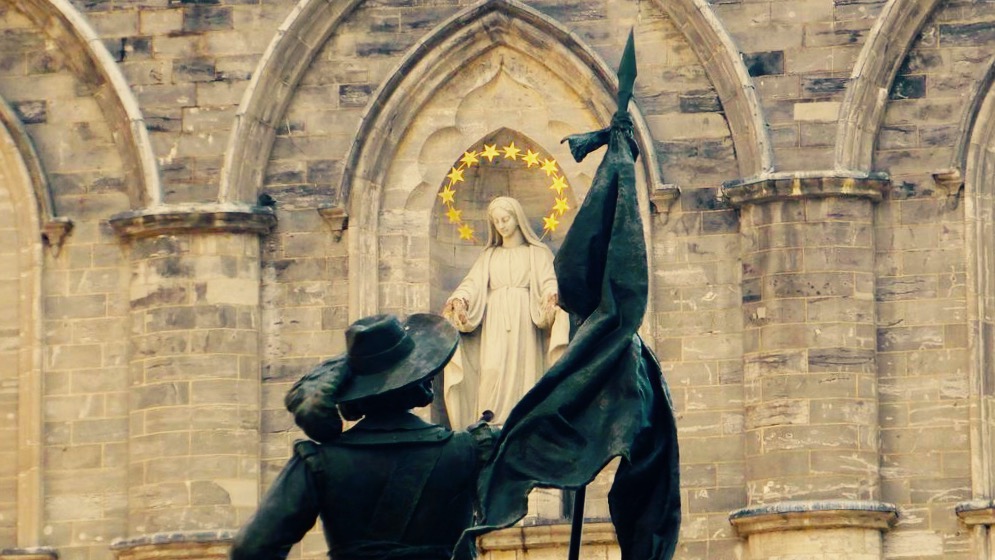 A celebration of history, the founding of the City of Montreal in 1642 originally Ville Marie is linked to where present day Musée Pointe au Callière is located.  In 1535, Jacques Cartier a French Navigator founded the surrounding settlement then inhabited by the St. Lawrence Iroquoians.

The City is a celebration of the immigration of both the French Acadian and English Loyalist culture.  It explores the difficulty of historic problems prior to the Confederation of Canada in 1867 between the Bristish North American Colonies and the French Acadian culture, then known as New France a state created after the French Wars of Religion 1562-1598.

The ‘Treaty of the Great Peace of Montreal 1701’ was signed between the Governer of New France, Louis Hector de Callière and 39 aboriginal nations including the Iroquois Confederacy, the Huron and Algonquin peoples.

The City is a celebration of Cultural and Industrial History.  The Lachine Canal Lock system designated National Historic Site of Canada and the founding of the Canadian Pacific and Canadian National Railway are historically linked to Montreal.

The McCord Museum located in front of McGill University documents through varied exhibits the history of our nation.

Sent from myMail for iOS

Château Ramsey is a Historic Museum located in the Old Port of Montreal, facing the City Hall on Notre Dame Street.

Built in 1705 for the Govenor of Montreal Claude Ramsey it is the oldest private history museum in Montreal, designated National Historic Site of Canada in 1949.

The Museum is built in an ‘authentic stone construction’ featuring sturdy stone walls and wood stove fireplaces. The Governors Garden, inaugurated in 2000 has won an excellence award from the Landscape Architects of Canada.

Designated National Historic Site of Canada in 1929, it is symbolic in the linking of the Atlantic Ocean to the Great Lakes of Canada through  the St. Lawrence Seaway.  A technological feat, it runs 14.5 miles from the Old Port of Montreal to Lake St. Louis.  It allows ships to bypass the treacherous Lachine Rapids.

Montreal Windsor Station opened in 1889 and was home to the Canadian Pacific Railway.

Instrumental in transporting thousands of immigrants in their journey as Canadian Citizens, the Railway along with Confederation was considered a National Dream by the Canadian Government.  Today the passenger services are handled by Via Rail Canada.

Built in Romanesque Revival style the walls are made with grey limestone from a local quarry. The Station was designated as a Heritage Railway Station (Canada) 1975 and Cultural Monument of Quebec in 2009.

The interior of the church is considered a masterpiece of Gothic Revival Architecture, the vaulted ceilings decorated with golden stars and wood carvings attracts millions of visitors annually. The stained glass windows describe elements of religious history of Montreal, rather than biblical scenes. A Casavant Frères organ 1891 has 7000 individual pipes. The two bell towers; the West Tower (Perseverance) the bell named after St Jean Baptiste and East Tower ( Temperance ) holds ten bells imported from England. John Ostell Architect completed the towers after O’Donnell’s passing. The facade completed in 1865 and the three statues depict St. Joseph, the Virgin Mary and St Jean Baptiste. It remained for a number of years, the largest church in North America.

The Bank of Montreal in Old Montreal founded in 1817 is Canada’s oldest Incorporated Bank.  The Bank was located in Canada’s central Financial District between the mid 19th and 20th century.  The Bank served as Canada’s Central Bank until the founding of the Bank of Canada in 1935.  It was the official Bank for the Government of Lower Canada ( Quebec ).

The Bank joined with other Banks to create the ‘Canadian Bankers Association in 1891.’  In the Post-War period the Banks were authorized by Government to purchase real-estate such as homes.  In 1954, the Bank of Montreal was the first Chartered Bank to do so.

The Bank is located on Saint Jacques Street across Place D’Armes Square across the Basilica Notre Dame.  The building is the home of the ‘Bank of Montreal Museum’.

The Bank, completed in 1847 was designed by Architects John Well.  The building is in new-classical style. The sculpted pediment represents the era of the ‘Great Peace’ in Montreal with the aboriginal people’s.  The pediment was executed by John Steel.  There were additions to the building between 1901-1905 by N.Y. Firm of McKim, Mead & White.

The Maison Saint-Gabriel Museum located in Point-Saint-Charles, Quebec is dedicated to preserving the history, heritage and artifacts of the settlers of New France in the mid 17th Century.

Pointe-à-Callière Museum of Archaeology and History in Old Montreal, Quebec. Founded in 1992 as part of celebrations to mark Montreal’s 350th anniversary, the museum has collections of artefacts from the First Nations, including French and British exhibits of early colonial New France.