The architectural style of the building provided the important link between the nickelodeon, vaudeville and movie palace eras; the building exemplified the old and new of these changing times and contained features unprecedented in the traditional vaudeville theatres of Toronto

Special features include: the exterior box office, a Corinthian columned lobby, the narrow main lobby façade and the lobby corridor to the auditorium, and the single balconies supported by enormous cantilever steel trusses

65,000 square feet of new space was added, including: cascading lobbies, an eight-storey backstage addition containing dressing rooms, loading docks, rehearsal studios and other facilities for contemporary theatre use. A crossover bridge creating access to escalators for the new lounges and washrooms on each level

In the Elgin, opera boxes and plaster details were re-created where they had been damaged or removed over the years; details over the proscenium and balcony facia were sculpted, cast and replaced.

Wafer-thin aluminum leaf were used in the seven-step process of re-gilding the plaster details in the Elgin; “scagliola,” the process of marble veining, was used in the lobby and grand staircase, with over 10,000 square feet of surface being re-created or conserved.

Hundreds of pounds of bread dough was used to clean 20,000 square feet of hand-painted walls in the Winter Garden Theatre. 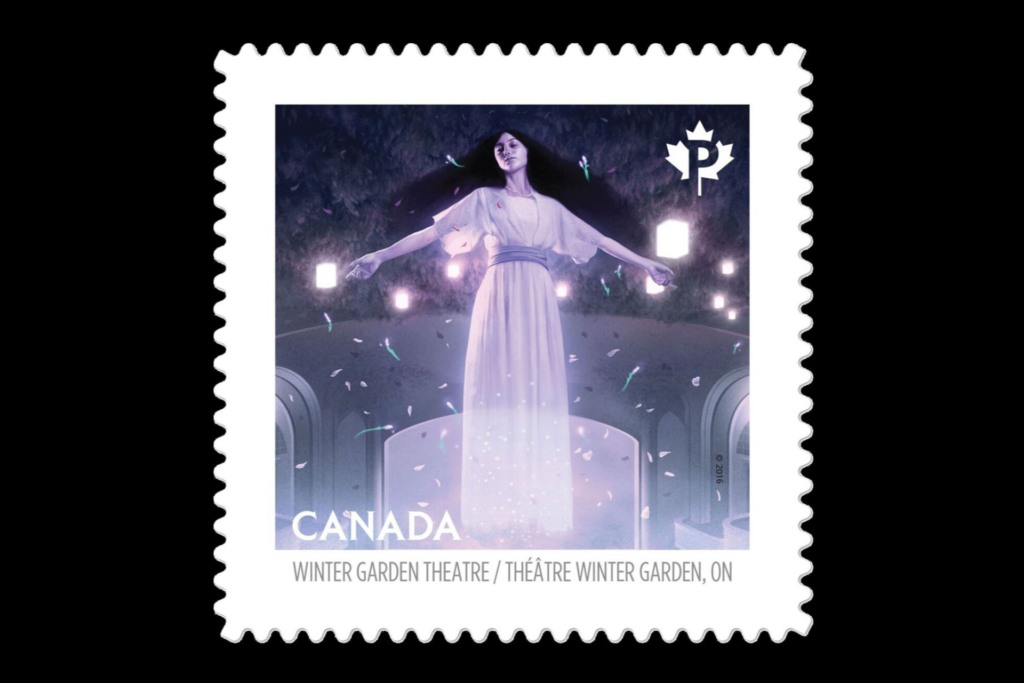 The famous theatre now known as the Elgin and Winter Theatre Centre, opened nearly 110 years ago. Thanks to conservation efforts over the last forty years, stepping inside the theatre is like stepping into a different era. While experiencing the breathtaking grand staircase and hand-painted walls, one might also have a spooky encounter with a ghost. The theatres most famous ghost is the “Lavender Lady”, and she is so famous she was featured in Canada Posts’ haunted Canada stamp collection. The “Lavender Lady” is a bit a mystery, rumoured to be a rival actress or a wife of a Vaudeville girls’ admirer. You will know if you experience the “Lavender Lady” as she has three characteristics: being spotted on the grand staircase or the original historic elevators, causing a temperature drop or cold breeze, and leaving behind the smell of lavender. The theatre holds other spooky spirits like Sam, the trombone player, a voice in the dark, and the rehearsal interlopers. Learn more about the Elgin and Winter Theatre Centre’s ghosts through virtual tours available on their website. Click here.

Toronto, Ontario
This National Historic Site is home to the head office of the Ontario Heritage Trust.
View Place | Get Directions

Toronto, Ontario
Traitor or Patriot? Visionary or Fool? Friend to Democracy or Enemy of the Crown? What rol…
View Place | Get Directions

Toronto, Ontario
The museum is a vibrant public space where members of Toronto’s diverse communities gath
View Place | Get Directions

Toronto, Ontario 11 places
We’re made a list of some of our neighbours here in Toronto. Check them out!
View VisitList

Toronto the City That Never Sleeps

Toronto, Ontario 3 places
Toronto is a world class city that is never afraid to embrace both the past and the future
View VisitList